COLLECT AND DESTROY :: TOYS AND RELATED :: Anything Goes.

It's in a power strip though, I'll have to see if plugging it directly into the outlet will make a difference.

ontheDL wrote:Just tried the iphone charger and it's still taking about 40 minutes

It's in a power strip though, I'll have to see if plugging it directly into the outlet will make a difference.

Haven't tried an iPhone charger but I doubt it would matter in my case. Both take 40 to 45 minutes to charge as long as they are done one at a time. Obviously there is some issue with equal voltage to the ports on the USB hub when multiple sockets are used. The only advantage I can see is that if I had two of the iPhone chargers then I could be charging both at the same time.

I did get two more of the AC adapters just to see if the first one was defective. All three operate exactly the same. Green LED is on when plugged in to the wall, LED turns red when charging, never goes off or gives any clear indication when charging is done. I timed the first test to my usual USB time and it didn't give a full charge. Going to return the lot of them, not worth anything as far as I can see.

Tried out this USB charger.

gregm wrote:Tried out this USB charger.

The HTC version of that charger also works pretty quick.

damn! this looks so fun for just $20 (initial investment, lol).

Hello, fellow rc nerds. It's been a while. I just got this BEAST of a 4ch from amazon a little more than a month ago. All I'm sayin is...order one. Plan on flying it almost exclusively outdoors though cuz it's crazy fast. Fun as shit though. AND its a 4ch.

It's $50, so it's a little bit more expensive than the "disposable" $20 symas, but it's worth it. They sell replacement helis without the transmitter on ebay for $25 too, so after you take the plunge it's pretty inexpensive to replace them from then on. I've beat the shit outta this thing too and it's still flying great.

Back from the dead!

Ya I would have never saw this thread ..thanks man!!

Hey bignasty, so that emax you linked has no problem flying with a gopro on it? What kind of remote do you use?

ya no problem at all..i would say its nearing its limits but it still flys good..thats what the videos i posted are filmed with..and im also using a 2200mah 3s lipo which is the biggest recommended battery for it..i am flying at 3/4 to full throttle most of the time tho but thats just because i fly like a dick..lol..and for transmitter i have a Frsky Taranis Plus with a Flysight Black Pearl 5.8ghz diversity monitor with a VAS blue beam and a 6 turn helical antenna.. 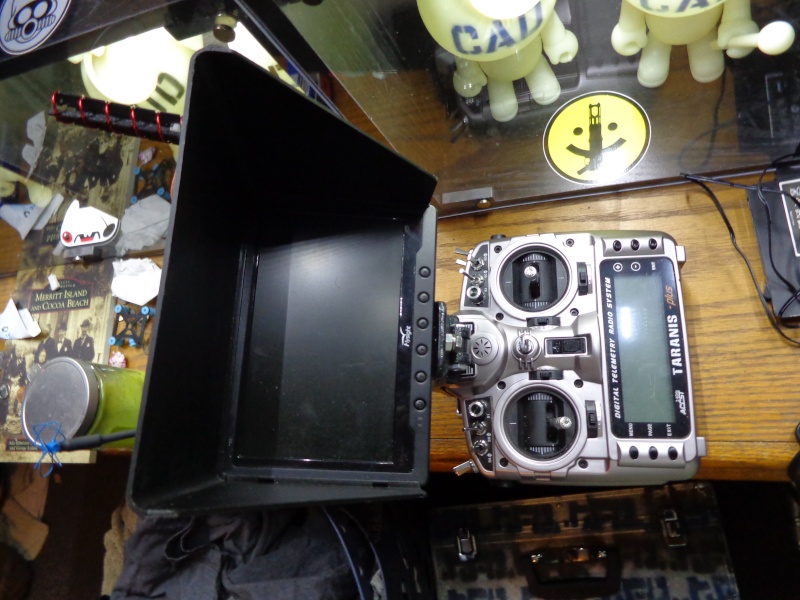 Jesus. I have no idea what any of that is. It sounds expensive though.

lol..ya i tend to go a little overkill when it comes to equipment..i like to buy once and not worry about replacing it or upgrading it down the road..and when it comes to transmitters seeing as how i use it for everything from my quads to planes and im contemplating getting a 1/8 scale truck when i get home from vacation next month..so i got a nice transmitter, i think there like $250 and the monitor and antenna's i scored on ebay for like half price at $250 so ya a little expensive but like i said im not planning on upgrading for a loooong time now..lol..and anyone else reading this dont get scared off by the prices you could easily get one of these guys up and flying(without fpv camera equipment) for around $400 to $500 total Transmitter ,quad,charger and batteries... and FPV for another $150..but its sooooo fun..haha..complete different perspective on the world..

This shit is overwhelming! I'm trying to do research but there is just so much information and too many quads to choose from. Is that 250 pretty popular for first time builders?

ya i would say so..it was my first scratch build..and nice and cheap if you kill it($30)here is a link to a video Bruce from rcmodelreviews where he does on a step by step low cost 250 build..

but ya there pretty much all the same electronic wise and most entry level frames are around $20-$40 and are pretty much the same lay out..of course carbon fiber will be a bit lighter but a bit more expensive..you can get a carbon composite mix(like my emax) also that still gives you the strength of CF with just a little more weight..or theres G10 frames now also but the one G10 frame i have is on hold until i get more parts so i have no experience with one of those yet but have heard good things..and ya man i know i like totally nerded out on research(my favorite past time) for about a month before i pulled the trigger and would be happy share any knowledge if you or anybody here needs any help if you decide to get into a build..

Heres a little vid from today..to bad the best one was corrupted when i came in for a little "hard landing"..lol..

I can see my house from here ...haha

Thanks for the how-to link! Exactly what I needed. I stayed up way too late watching those videos. And I coincidentally ordered a zmr frame the other night...it's happening!

grats dl, i need to get my shit together

Hell ya man!! Congrats..its soooo much fun and let me know if you have any ??'s But between rcmodelreviews and flitetest I'd say your in good hands..lol..

Just the frame and motors. This is definitely gonna be a slow build. Having to spend $200 on a radio is still kinda blowing my mind. But I guess you did make a good point - I'll probably never have to upgrade it.

such a sad day(s)..its still setting in..took the blackout 330 out yesterday to blow off some steam from a shitty morning(2nd flight with it).. was on my way to the big field where i usually fly but saw another guy flying a quad at a smaller park by my house and decided to go see what he was up to..got set up and took off and had some odd video interference and flew one battery and decided to call it quits..some little kid saw it and was like "that thing is sick" so i threw another battery in and decided to fly line of sight for a few just to show off for the kid..big mistake..

..i was doing some flips and lost orientation of the quad and what would have been a easy correction flying FPV was a reversed correction because the quad was facing me and not away from me as i thought sent the quad behind a building so i killed the throttle to avoid landing in the water..guess what

..searched the small brush along the pond to no avail then went in after it..and did i mention it is a alligator infested runoff pond that is posted no swimming alligators in pond?..

..so after spending about 3 hours neck deep in there still came up with nothing..went and got n8ivs kayak and a cast net and drug it around until i couldn't move my arms and got dark/gator time..went back today with fishing poles and huge hooks and weights.. nothing..$25 buck worth of neodymium magnents..nothing..25ft shrimp net..nothing..im so pissed at myself for that shit..i stopped counting losses at $1k..im sure nothings salvageable but the frame..gopro is with it without the case so its toast

.. damn i gotta say yesterday/today was a bad day..and be careful around water..it can all be gone so fast..

That's brutal, man. You sure it went in the water? I feel like you would've found it.

ya im 95% sure its in there..i looked all around in trees, brush, bushes you name it i looked everywhere before i went in that water..lol..

COLLECT AND DESTROY :: TOYS AND RELATED :: Anything Goes.